An emblematic episode of the franchise, Final Fantasy VII is back to modernity with this re-imagined version which will be only the first episode of a long saga. Exclusive to PlayStation 4, Final Fantasy VII Remake offers a splendid and vibrant view of life in Midgard, the futuristic city where this first part of the story takes place. But does Square-Enix’s modernity respect the original work? Answer in this test.

After long months of waiting (a wait that was even a little longer than expected), Square-Enix has finally released Final Fantasy VII Remake, a completely reimagined version of the 1997 PlayStation One hit. Two years after Final Fantasy XV (with less additional content than originally planned), the arrival of this Final Fantasy VII Remake, one of the twenty most anticipated 2020 games, allows us to return to Cloud and Sephiroth, Midgard, Mako, and Shinra. If fans will be largely surprised by the new scope of the game, everything has been done not to shock them. At least, not too much.

A high-risk renaissance
Final Fantasy VII Remake is, in our opinion, the most complex project that Yoshinori Kitase, the current producer of the series, had to take on. Because Final Fantasy VII is one of the most popular episodes of the series. With many fans. In addition, the Final Fantasy VII franchise is one of the most complexes of the series, with several spins off (Dirge of Cerberus, Crisis Core) and two animated films (Last Order and Advent Children). Finally, the original game was based on a very classic turn-based Japanese RPG gameplay. Gameplay that some people now consider outdated and that you can no longer find in major console productions. 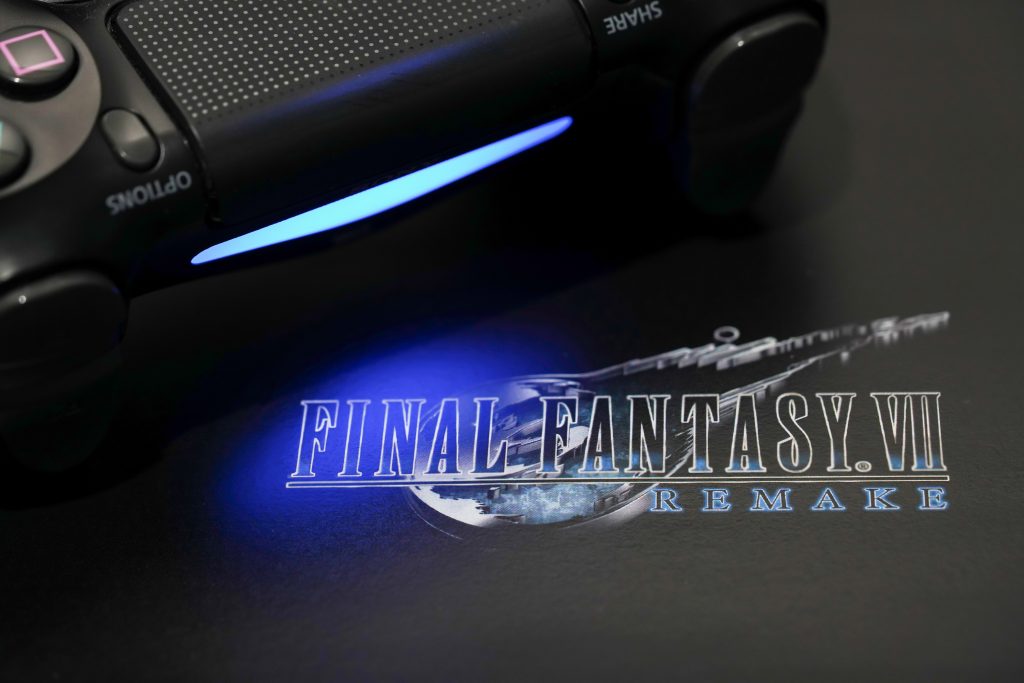 The FF XIII trilogy is a prime example of the series’ evolution from a classic semi-real-time RPG to modern real-time gameplay. A molt that has extended to FFXV, the latter being considered an “Action-RPG” with obvious Western influences, both in the atmosphere and the rhythm. Something you’ll find in Final Fantasy VII Remake. First, FFVII Remake attempts to reconcile the past and the present by offering two different “game styles”: “classic”, where the player only has to decide what special actions to perform, almost like a turn-based RPG, and modern, with real-time battles that can be slowed down to use magic and items. Kind of like FFXV.

A very (too?) action-oriented gameplay.
This comparison with FFXV becomes stronger once the game is started. Final Fantasy VII Remake gives the action the upper hand by giving Cloud all the room it needs to fight. Two buttons on the controller are used to make different sword hits and two other buttons are used to parry and dodge hits. These different actions are used to fill an action gauge that unlocks special moves (Transcendence) when it exceeds certain thresholds. A simplified menu called the Command Menu is used to cast basic spells, summon and skills, use objects and trigger transcendencies. Everything is done so as not to interfere with the action.

As in the original game, Cloud is not the only playable character, quite the contrary. Barret, Tifa and Aerith are also present. All of them have their own particularities, with different techniques, spells and actions on the ground. Barret targets inaccessible enemies. Tifa is an expert in enchainments. Aerith stands out in magic, especially healing. While it is possible to choose another character to fight with, the new combat maneuverability does not allow you to plan your strategy serenely, a remark that players on FFXV have also made. Customization and adaptability will come from equipment, materials (and the spells they’ve acquired), skills learned through the Cloud, as well as weapon customization. This depth of customization is unprecedented compared to the original game. And that’s a good thing.

A finely detailed and structured scenario
Another good news, Final Fantasy VII Remake takes the scenario of the original game. You start, as in 1997, on the platform of the Mako 1 reactor station and you infiltrate it to destroy it with Barrett, Jesse, Wedge, and Biggs, the four members of Avalanche. The first chapter, which makes up the entire demo released a few days before the full game, covers the attack on the mako reactor. But from the very first moments, you quickly realize that every line of the original scenario has been fleshed out and the few blanks have been filled in.

Three concrete examples. First example: Jesse, an invisible character from the original game, is greatly exploited here. It is still not playable. But it informs Cloud of the new game’s new mechanisms. She even goes to give him a Materia and flirts with the hero. Second example: Sephiroth. The character appears very quickly in the form of hallucinations mixed with memories of Cloud’s past. The black feather in the heart of the Mako reactor was already a strong clue. This becomes explicit from chapter 2 where he appears in front of Cloud when sector 8 is on fire, while Sephiroth does not appear in the original game until much later, after Aerith is rescued by the Shinra.

One last example, Aerith. She meets Cloud as early as chapter 2 of Remake, offering him a flower, whereas she normally doesn’t meet the hero the first time until much later, in the slums, after the latter has been reunited with Tifa. Chapter 2, which links the leak from the Mako reactor to the arrival in the slums, is in itself a pure and simple addition to the scenario of this new version. It is all these additions that explain why Final Fantasy VII Remake will not be a game, but a suite of games that will offer, we have no doubt in the light of this test, the best possible reading of the story of Cloud, between his departure from his home village and his arrival at Avalanche.

An exploration that opens up little by little
Like Final Fantasy XV, from which he takes the cut in identified chapters, Final Fantasy VII Remake reveals a neat writing. As for many other opus of the series, the story is dirigiste in the first chapters. The part given to the free exploration is then rather reduced in order to stick to the strongest moments of the scenario. But this improves after about two hours of play.

Indeed, without reaching the level of a Final Fantasy XV, with its wide open spaces and open world, Final Fantasy VII Remake does not forget those who like to unearth secrets and explore every nook and cranny. By arriving in the slums of Sector 7, which will be your base of operations, you are finally in control of your destiny. Side quests. Monster-clearing missions and lost item searches. Window-shopping for equipment upgrades. Interaction with non-playable characters. Midgard is finally opening up, little by little.

And this is perhaps the most amazing thing between the original version of the game and this remake. The city is vibrant with life. The streets are swarming with characters chatting with each other, calling out to you and watching you. And the moods are different in different parts of Midgard, between the high and low areas. Final Fantasy VII Remake offers an immersive experience, served by a complex and fine technical realization where it is often difficult to know if it is a cinematic or a scene made with the game engine.

This game is technically very impressive. First at the visual level, with light and smoke effects, or at the character modeling level, especially Cloud that you see most often. He turns his head when a passerby pushes him around. He protects his face from the fire (below). He stands up when he goes down a staircase. Then at the sound level, with live sound effects, fully dubbed and subtitled dialogues (with Japanese voices accessible from the beginning, without DLC) and a soundtrack reorchestrated by its original composer, the great master Nobuo Uematsu. These are details. But it’s all about details.

Conclusion
Final Fantasy VII was my first game on PlayStation. I even bought the Sony console for it. Final Fantasy VII was a turning point in my life as a gamer. And I played it again recently on Android. I didn’t hesitate for a second to pre-order FFVII Remake almost six months ago. And it was with apprehension that I installed and launched it on my PlayStation 4. Because I was afraid that the experience would not live up to Final Fantasy VII’s expectations. Or that it would be too different from the original work.